This brief review of John Hattie and Gregory Yates’ Visible Learning & the Science of How we Learn (#HattieVLSL) is written from the multiple perspectives of a science teacher, IB MYP Coordinator and MA student. I have read both Visible Learning and Visible Learning for Teachers, and regularly refer to the learning impacts in my professional discussions and reflections. While reading the book, I started the #HattieVLSL hashtag to try to summarise my learning in 140 characters and to get more people to join in the conversation – more of this below.

Read the Australian Society for Evidence Based Teaching‘s 2015 critique of Hattie’s work.

This review was written right after the release of VLSL, in late 2013. Since then, the ideas of ‘know they impact‘ and measurement of learning impacts have really taken off in education, particularly in international schools. Critics of Hattie (largely focused on mathematics or methodology) are also easy to find, though the Australian Society for Evidence Based Teaching concludes that “statistical errors do not change any of the findings” and that “Visible Learning remains the most significant summary of educational research ever compiled.“. We do need to be mindful that what works in some contexts might not work in others, and that the visible learning impacts could be used as a set of signposts for further investigation in our own contexts, rather than a list of ‘must do’ strategies for all classes.

The rest of this blog post has remained untouched since 2013. 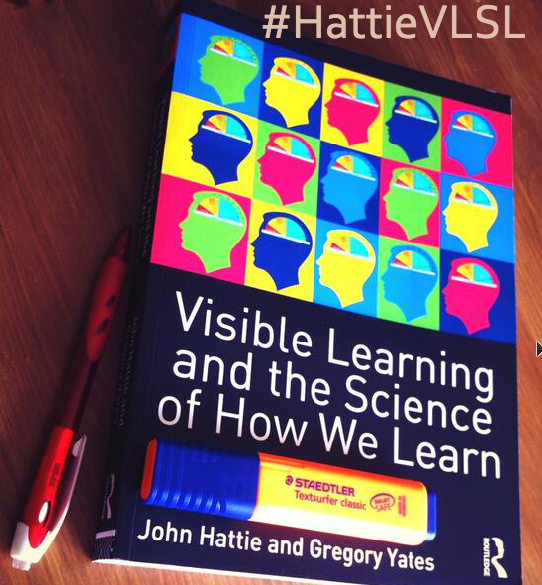 Visible Learning and the Science of How we Learn (#HattieVLSL) is an engaging and accessible guide that connects the impacts of Hattie’s meta-analyses with discussion of current understandings in the field of how we learn. It reduces the ‘jargon of learning theory’ to the implications in terms of learning and teaching (without overly dumbing down), and aims to facilitate clarity through relegating researchers’ names to the references (and focusing on the findings in each of the 31 chapters). This aids swift reading; it would be useful for the novice teacher as a general overview of teaching and learning at the start of their studies in education. On the other hand, the academically-minded will be sifting through the references and hitting the internet for supplementation and more susbstantial explanation.

It is a practical volume and can be dipped into and revisited as needed, though as a ‘how-to’ guide for high-impact practices, Visible Learning for Teachers (VLT) is more immediately actionable. It would serve well as a companion to VLT and should be of particular interest to teachers who want to dig deeper into the issues or to leaders who want to think more carefully before making decisions that affect teaching and learning.

#HattieVLSL is highly quotable and provides many provocations for further thought and ideas that might challenge a teacher’s thinking or way of doing things. It is concise with short, well-structured chapters, each ending with  an In Perspective summary, some study guide questions that could structure discussion (or a teacher learning community) and some annotated references to pursue. Discussion of ‘Fast Thinking & Slow Thinking’ is fascinating.

Although very strong, at times it feels like the examples used (Gladwell’s Blink, Khan Academy) are aiming for a more populist market and might open the book to criticism. Where we have bought copies of VLT for all teachers as a catalyst for teacher learning communities, this volume might better serve those who are interested in the theoretical basis for learning, perhaps as their own reading group or learning community.

I recommend the book to anyone who is already a fan of Hattie’s work, or who has an inherent interest in connecting learning theory and studies with the learning impacts, or visible effects in the classroom. I have learned a lot through reading this volume, have been inspired to learn more and will likely be boring others by talking about it for a good while.

More detail and some tweets after the divide…

END_OF_DOCUMENT_TOKEN_TO_BE_REPLACED

I have just presented on #HackTheMYP at the IB Global Conference in Yokohama. At the conference there has been a lot of talk about Visible Learning. Since 2013, when I gave the Mind the Gap presentation, Visible Learning has really taken hold in international schools, as well as attracted some critics. Please read here for a review of Hattie’s more recent Visible Learning and the Science of How we Learn, as well as links to some critiques of the work.

Of course, since 2013 the MYP Next Chapter has taken place, and is now up and running. It is a great updated to the programme, and it is easy to put high-impact teaching practices to work to generate success in MYP… and send great learners up to DP.

I used the ideas in this presentation as the foundation for some assignments with the University of Bath, and in forming the pragmatic definition of inquiry. The rest of this post remains untouched and reflects my thinking back in 2013.

Last Saturday I led my first conference breakout session, at the IB Asia Pacific Regional Conference 2013. It was hugely nerve-wracking, yet thoroughly enjoyable and well worth doing. As James MacDonald said in his session on Creativity, there’s nothing like doing a presentation on a topic to make you learn a lot about it – quickly!

When I was preparing the session, I had a few aims in mind:

Also, after reading more about the Hattie meta-analysis, I wanted to introduce this as a ‘lense’ for these discussions. Whichever side of the fence one may sit with regard to the MYP-DP transition, it is hard to argue with evidence-based teaching and learning. There are strong practices from the DP that can be used in the MYP, as well as strong practices from the PYP and MYP that DP teachers might appreciate more fully with the evidence base.

To (try to) achieve this, I built a wikispace for resources, along with a Prezi for the session and some Wallwishers to collect participant ideas. I was careful to choose tools that would be available to participants when they got home (thanks http://www.blockedinchina.net/), and would be easy to use in the session. This meant many, many hours of preparation.

The premise was simple: are there significant ‘gaps’ between MYP and DP, either real or perceived, what does the evidence say about them (based on the Hattie meta-analysis), and what can we do about them?

MYP Mind the Gap: Click to go to the Prezi for my session.

I tried to classify some of the tensions into three main domains. The links take you to the wikispaces page for each.

In each domain, I summarised some of the key findings from the Hattie meta-analysis, and then provided a number of quotes and provocations for groups to discuss: this was an attempt at differentiation by interest, and as I circulated, I could see that there was a great diversity in the interests of the groups. Some groups diverged from the MYP-DP issues and got really into looking at the Hattie resources, which was fine by me – at least there was a take-home for them.

I was even able to include a shout-out to the #MYPChat and extend an invitation to all to join in.

The session turned out better than I had expected, and was worth the work.

The room was busy, with a couple of latecomers standing, and I tried to encourage a loud and collegial discussion. From the first stimulus question, people were engaged – it is clearly an issue that resonates with many schools. I joked at one point that I could just leave the room, but really I probably could have done. I was thrilled to see groups form that did not previously know each other, and one group near the front were lovely – some ladies from India, Indonesia and Malaysia who found they all faced similar challenges of national curricula as well as MYP-DP transitions. I hope they stay in touch with each other!

The hour flew by – which I expected – and I got the sense that the participants enjoyed it. The feedback I received after the session was very positive. Although we had some issues with connecting to the Wallwishers for posting ideas there was little need (that was probably a tech-step too far for some people), everyone received a paper ticket with the URL and QR code, so they can revisit the domains of tension in their own schools.

One comment I’ve had a couple of times is that there is enough material in this to develop a full workshop, which would be cool: taking an evidence-based view of teaching and learning across the transition to strengthen our practices. As the IB grows in its research base and strengthens its provision of pedagogical workshops, this might have a place.

MYP Coordinator at the Western Academy of Beijing. I taught IB Biology & MYP Sciences in Indonesia & Japan and am experienced coordinator and Director of Learning. Family guy, author of i-Biology.net and moderator of #MYPChat and creator of @MYPChat roaming Twitter community.

This site collects writing and resources over the years, including MA studies, development work and professional learning. I believe in open sharing and community building.

Through powerful, pragmatic, action-oriented inquiry, we can educate for a future worth living. To do this, we need to connect the best of all worlds of learning.

Find out more in the 'About' section.

Stunner of sunset in the village
Sam's back on the Kung Fu.
Chinese garden at WAB.
Back at it in Beijing. Been a busy few weeks, with welcoming newbies and the transition back to MYPCo. But it's fun. The skies are blue, the work is worthwile. A few wee snapshots...
UBC Botanic Gardens
What a view from the Kitsilano Lido.
I made an open account for sharing photos: @sjtylr_image. Mostly photos on my #Mi8 and #snapseed edits. No photos of the kids' faces. This one will stay private.
So awesome! We flew back from Nanaimo to Vancouver.
Rockpools
Ferry to Nanaimo.
Cycling the seawall at Stanley Park. Thanks @jasongraham99 & family!
Good morning, Vancouver
First views of Vancouver.
#OKSeeYou
Wolfpack vs Featherstone
Spotted, earlier today at Woodbine Beach. Could be a mink, but I'm weaselly confused. Maybe a ferret, fisher or marten, though they're stoatally different.
Overcast.
Woodbine Beach, Toronto. Dramatised in Snapseed.
Peek inside our AirBnB... a cool artists' loft in Toronto.